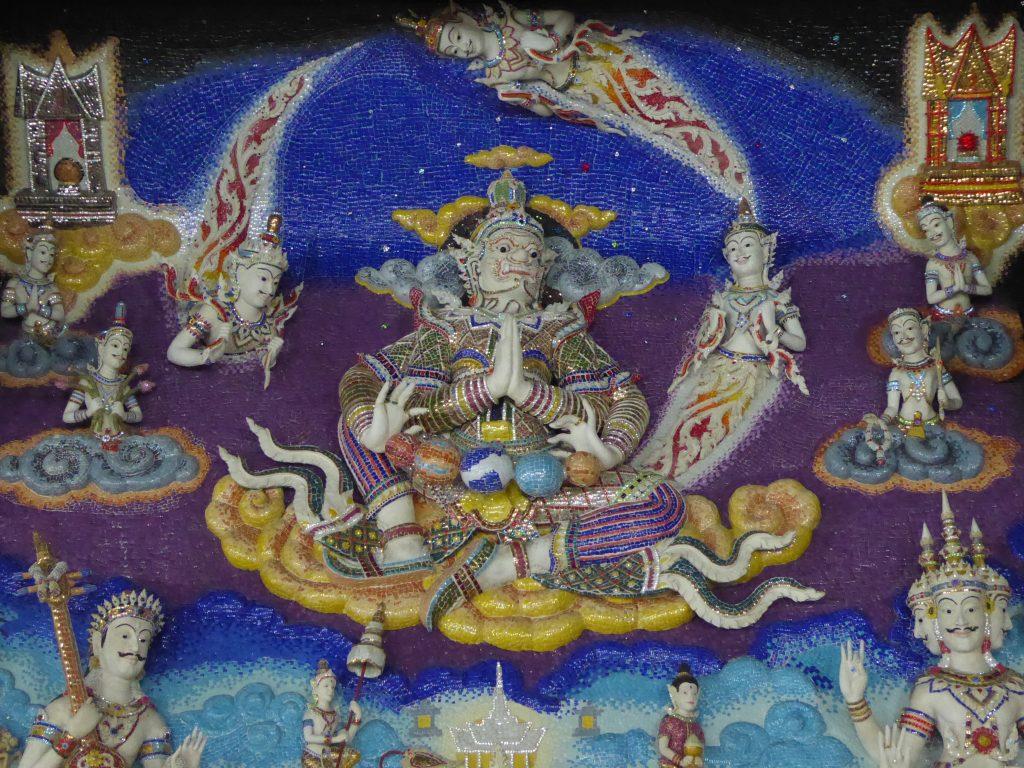 Wat Pariwat, also known as Wat Pariwas or the David Beckham Temple is a neighborhood temple famous for its golden image of the former football player David Beckham as well as images of popular cultural icons. The temple is on the banks of the Chao Phraya River near Rama III Road. It is easily accessible via the BRT rapid transit bus service. Wat Pariwat BRT station is just next to the temple and there is a connecting footbridge to the front gate.

On entering the temple grounds you will see a wall enclosed courtyard up a flight of steps. Within the courtyard are two buildings, one of which is complete and the other being restored. What you will find is one of the most unusual temple buildings in Thailand. It features unique beautifully crafted Thai mosaic depictions of popular cultural icons. There are cartoon/movie/anime characters, Indian gods & goddesses, animals, & mythical creatures. Also, Chinese & Japanese deities. They are spread all around the temple from the base to the roof.

If you walk around the outside of the temple you can spot Pinocchio, Batman, Superman, Spiderman, Captain America, Wolverine from X-men, characters from One-Piece, Mini-Mouse, the Incredible Hulk, Barack Obama, Popeye and more.

Entering the interior of the vihara through the decorative metal doors you will find the main Buddha image highlighted by a rotating color backlight. The walls and ceiling have more stunning colorful sculptures, frescos, and murals including Albert Einstein. The building next door is being refurbished but you can see some of the complete wall sculptures outside including Captain Hook, a cowboy, Donal Duck, Jackie Chan, Che Guevara, Tutankhamun and more. 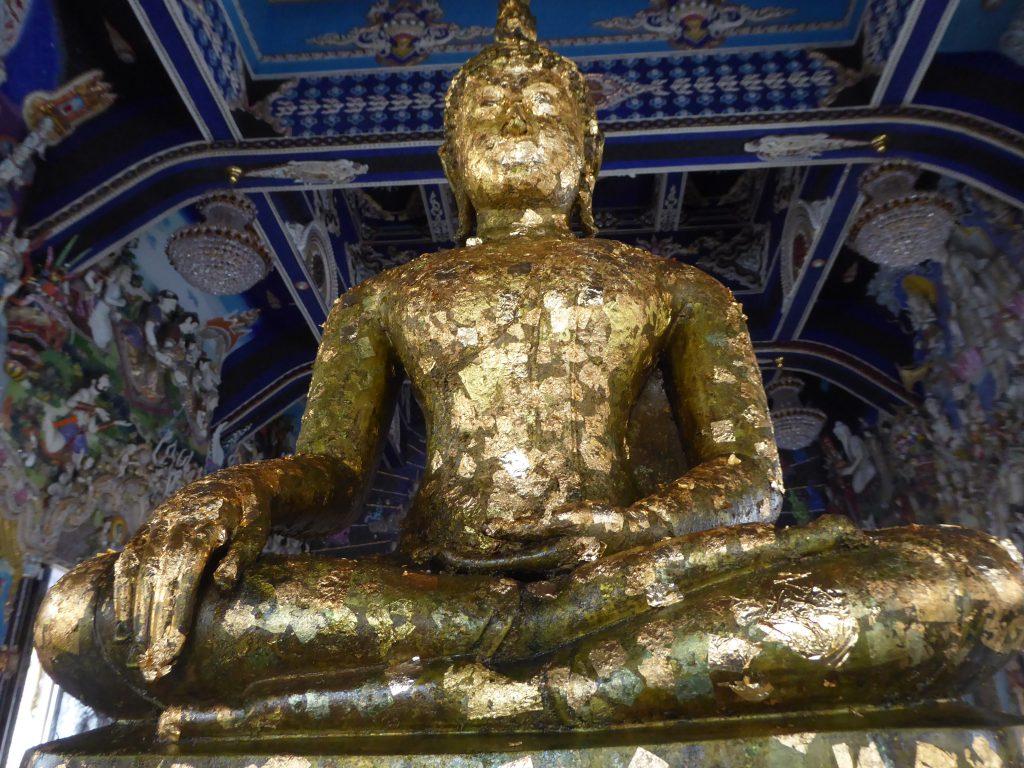 Exiting the courtyard near the two chedis you will see the blue-roofed temple ordination hall which contains the David Beckham image. The entrance is at the top of a staircase leading to the 2nd floor. The beautifully crafted doors are usually locked so you will need to ask to get in. Ask someone on the floor underneath or at the covered area to the right of the building. They will arrange this for you.

Once inside the hall, you will see the principal Buddha image surrounded by four smaller images at the far end of a long red carpet contained within a row of pillars. At the base of the image, in the far right-hand corner next to the back wall is Beckham from his Manchester United playing days complete with a floppy fringe and sharp logo on his shirt. The image is in the Garuda style helping to hold up the Buddha image. The Beckham image was installed in 1998 as part of the World Cup celebrations.

Elsewhere on the base, you will find images of two former Thai prime ministers. As well as the Beckham image you will find an array of stunning images and murals high up on the walls and ceiling.

Underneath the ordination hall, you will find another Buddha image. There is also a covered area to the right containing more Buddha images. Behind this area is a golden Chedi containing more Buddha images. A large Ganesha image is nearby. Beyond this are the Chao Phraya River and the temple’s pier where you can get a good view of the impressive looking Bhumibol bridge. You can feed fish here and there is a shady garden containing a refreshment shop, a restaurant, and seating. 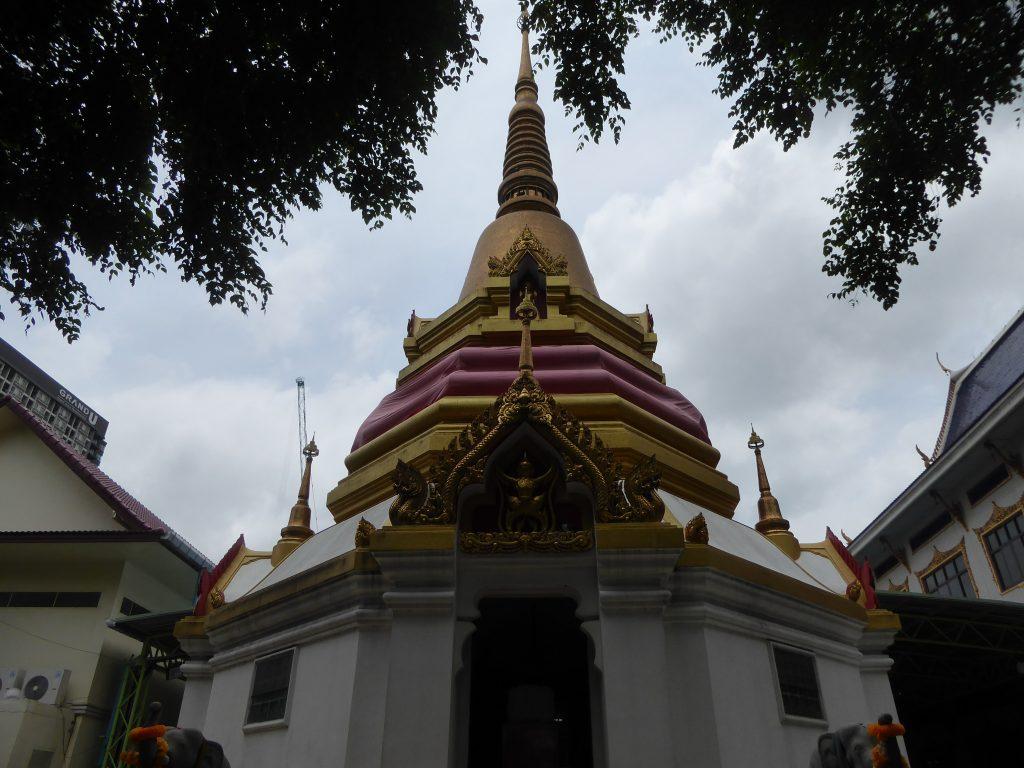 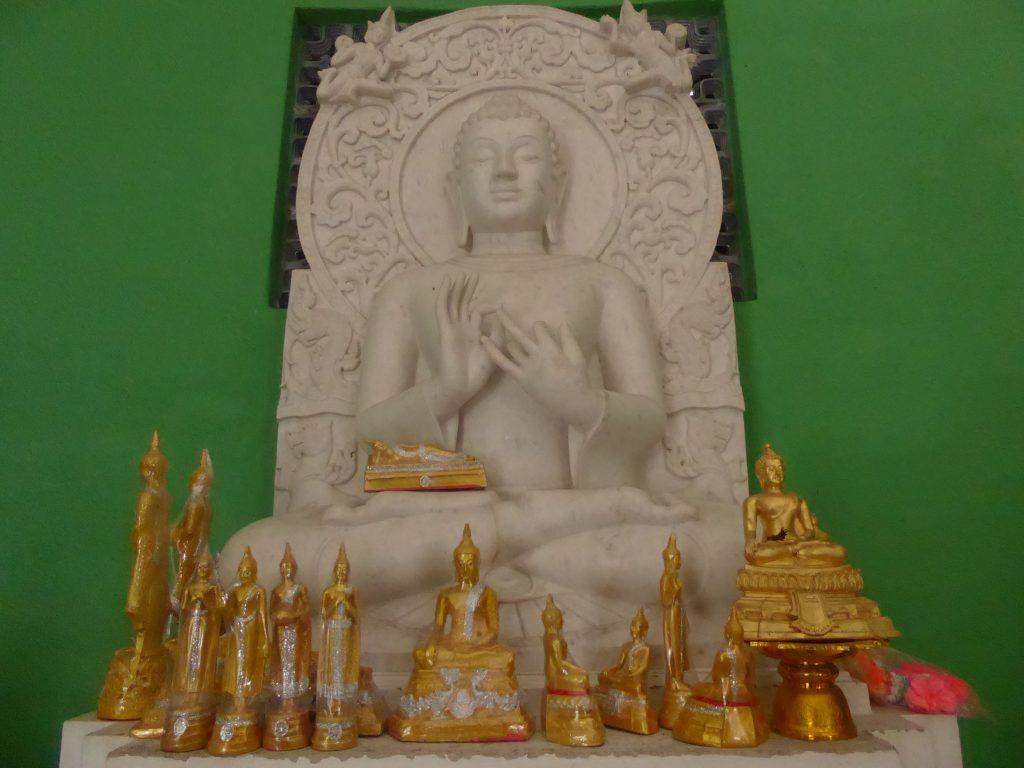 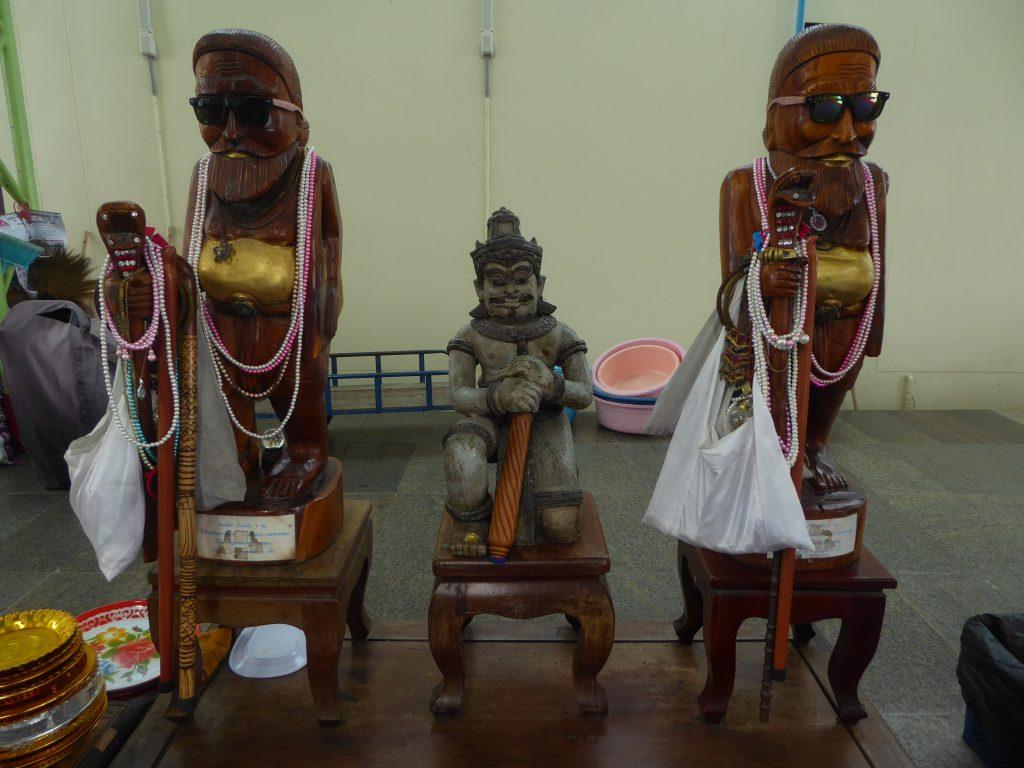 Wat Pariwat is well worth a visit if you want to see something a little different from the standard temples. It’s full of surprises and you can easily spend an hour or more here as there are lots to see. It’s also quiet and relatively tourist-free. Despite it’s off the beaten track location it’s convenient to visit. It’s only a 15-minute journey on the BRT from Sathon station.

Getting There: BRT Wat Pariwat Station. 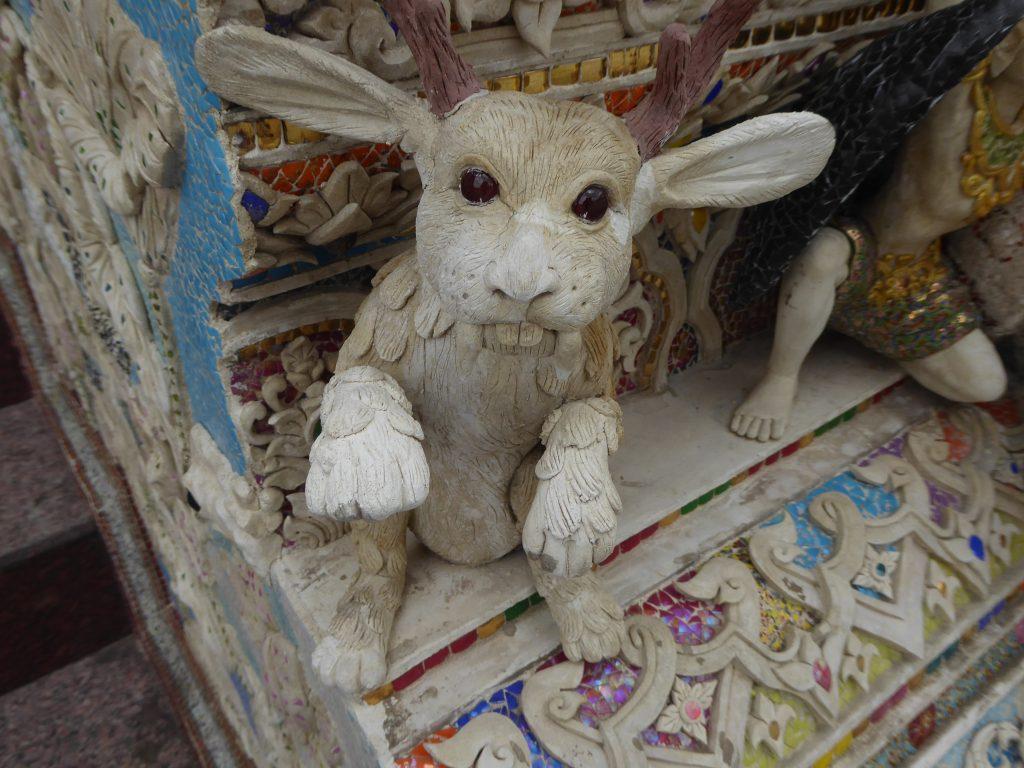 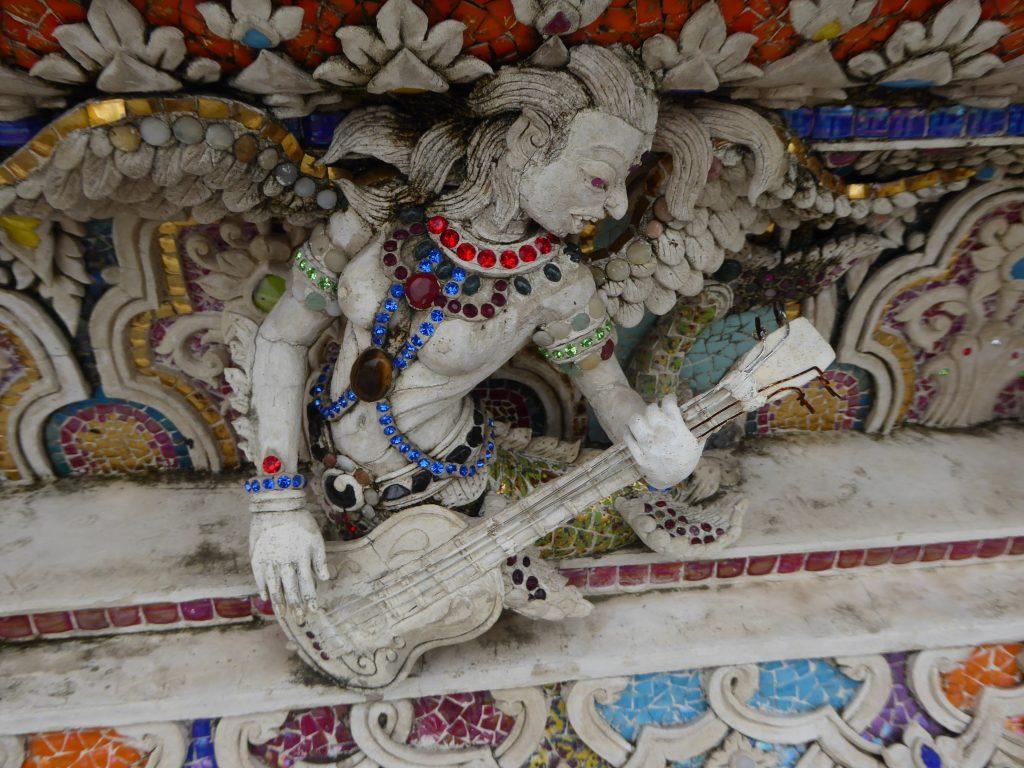 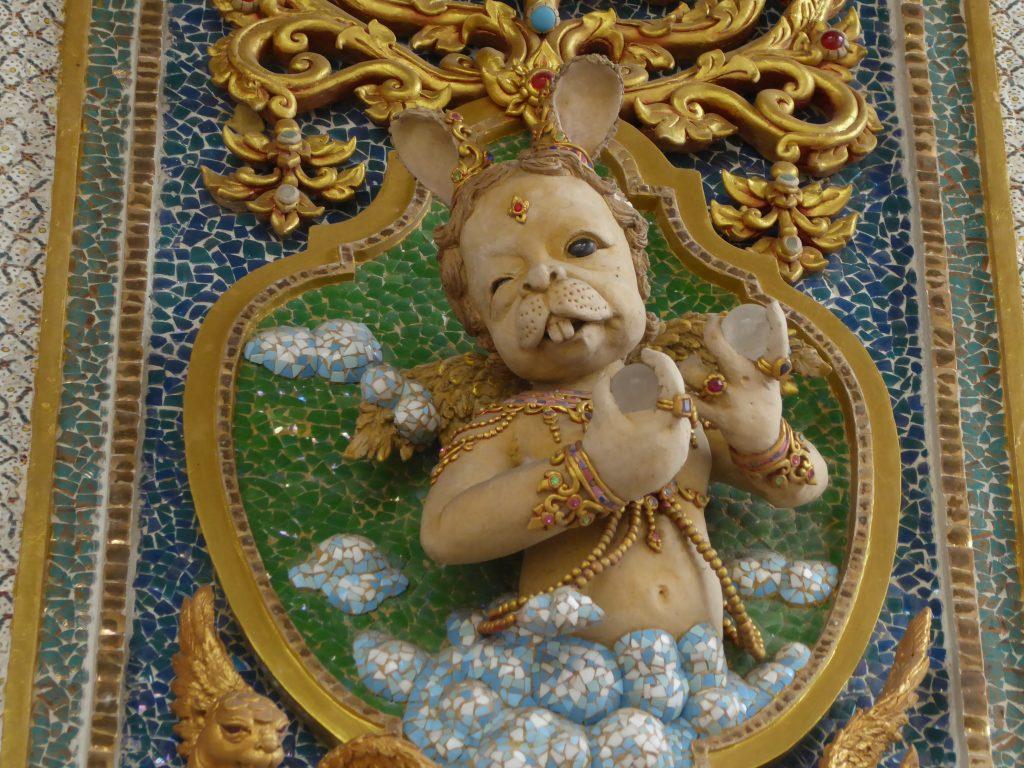 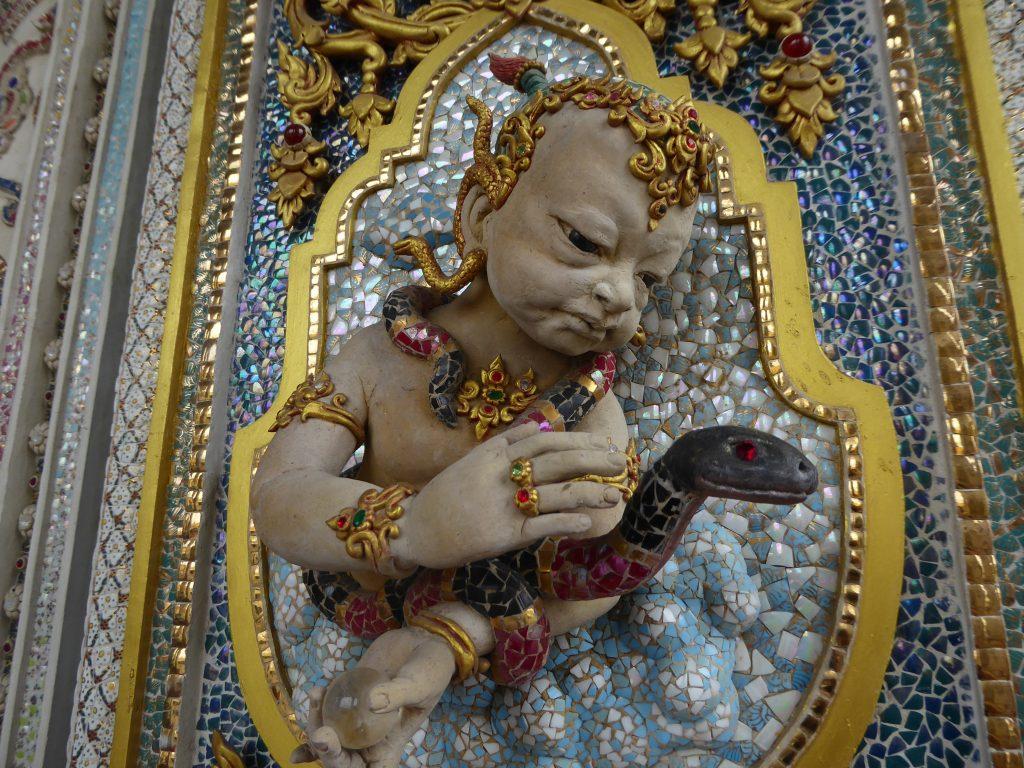 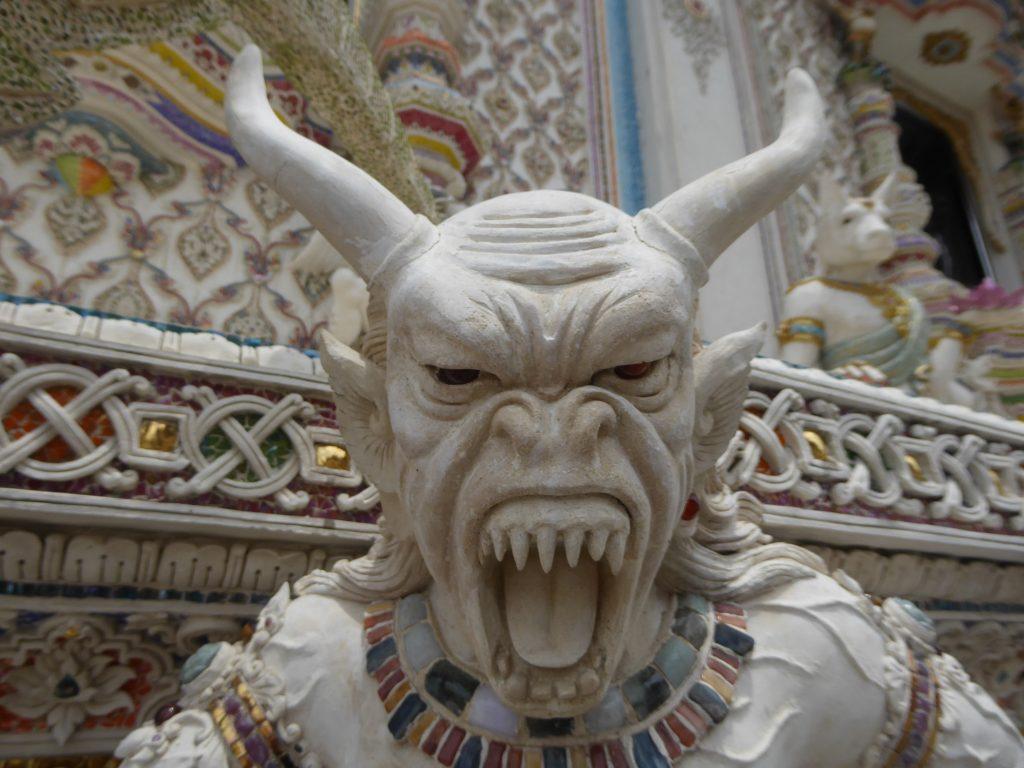