The Summer Palace of Thai Kings

Bang Pa-In Royal Palace, also known as the Summer Palace was a former residence of Thai kings. It?s a short distance from Ayutthaya on the banks of the Chao Phraya River. It?s picturesque, well maintained & highly photogenic. The palace is still used by the royal family.? 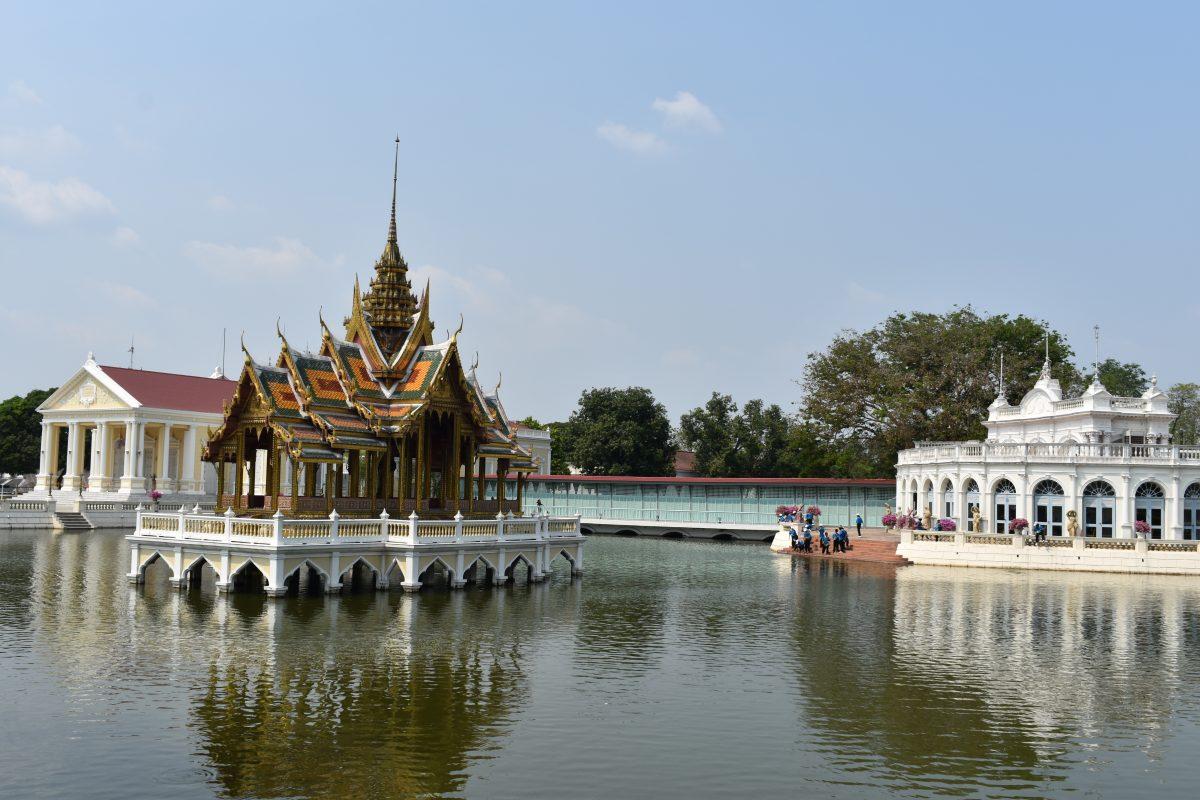 Bang Pa-In Royal Palace was originally built-in 1632 by King Prasat Thong who was the son of King Ekathotsarot. Ekathotsarot got shipwrecked on an island on the Chao Phraya River. There, he met a woman and they had a child, who would later become King Prasat Thong. He built the original palace along with a monastery & large pond. The only structure included in the original palace complex is the Aisawan Thiphya, though it was later reconstructed.

Bang Pa-In Royal Palace was later abandoned during the Burmese invasion of 1767 and fell into disrepair. The reconstruction of the Palace, started by King Rama IV was completed by King Rama V. Most of the buildings you see now date from 1872 to 1889 as do the large landscaped gardens. The palace buildings are a mix of Neo-Classical European, Classic Thai & Chinese styles. The King was particularly inspired by European architecture which featured heavily in the palaces reconstruction & in many classic buildings constructed in Bangkok during his reign.

The 46-acre palace grounds include many beautiful, impressive buildings. The Phra Thinang Aisawan Thiphya-Art is a Thai style pavilion on the palaces lake. The pavilion is also known as the divine seat of personal freedom. It is the most well-known symbol of the palace. The king built the pavilion in 1876 as a replica of the Phra Thinang Aphonphimok Prasat in the Grand Palace. It replaced the original pavilion built by King Prasat Thong. The Pavilion has four porches & a spired roof. A bronze statue of King Chulalongkorn (Rama V) is in the middle of the pavilion.

Just across a bridge from the mansion is a red & yellow tower, Ho Withun Thasana (Sages Look-Out). Built-in 1881, It was an observatory from which to view the heavens & surrounding countryside. You can climb a winding staircase inside all the way to the top. You will get great views of the Chinese Mansion & the palace grounds.

Opposite the tower is a small garden area containing two marble obelisk shrines. Firstly, the Memorial to Queen Sunanda Kumariratana who was the wife of King Chulalongkorn. She drowned with her daughter when her boat sank in the Chao Phraya River while on her way to the palace. As it was punishable by death for a commoner to touch a royal person, nobody tried to save them. The king was heartbroken and wrote a poem in English & Thai inscribed on either side of the memorial.

The Phra Thinang Warophat Phiman?is a Neo-Classical style one-story mansion, built-in 1876. King Chulalongkorn used it as his residence & throne hall. The interior decor contains paintings depicting events & scenes from Thai history & Literature. This where the royal family stays when they are in residence.

At the side of Warophat Phiman is a covered bridge which leads to the Deveraj-Kunlai Gate, a semi-circular building which holds exhibitions & contains some refreshment stands. There is an outdoor lakeside terrace where you can feed fish.

The Phra Thinang Uthayan Phumisathian was the favorite residence of King Chulalongkorn when he stayed at the palace. The building constructed in 1877, to resemble a Swiss-style chalet. It burnt down in 1938 & was later reconstructed. Only the water tank disguised in a Neo-Gothic tower survived from the original building.

The Saphakhan Ratchaprayun was a royal residence for King Chulalongkorn?s brothers when they visited the palace. It later became Thailand?s first department of land. It now holds an interesting exhibition about King Bhumibol Adulyadej (Rama IX). No photography in the exhibition.

The Ho Hem Monthian Thewarat shrine also known as Golden Palace, King of the Gods is a small Khmer style Prasat. It was built-in 1888 and dedicated to King Prasat Thong.

Around Bang Pa-In Royal Palace, you will also find several other small buildings used to house women of the court.

When visiting the palace, you will see a small Gothic-looking church on an island across the water. Its a Buddhist temple called Wat Niwet Thammaprawat. Its actually the palace temple built by King Chulalongkorn at the same time as the palace. You get to it by a cable car from the riverbank in the palaces car park. The cable car & temple are free. It?s well worth visiting as it?s a beautiful & unique temple.

There is a nice cafe, snack stalls, and souvenir shops just inside the entrance.

Dress Code ? Same as for a temple. No short Shorts/skirts or revealing clothing.

Getting Around Bang Pa-In Royal Palace ? You can walk or hire a golf cart. Golf Cart Hire 400 baht.

Where is Bang Pa-In Royal Palace?

How to get to Bang Pa-In Royal Palace

You can get to Bang Pa-In by train, bus, van, boat or take a guided tour from Bangkok.

From Bangkok Northern Bus Terminal, on Kamphaeng Phet 2 Road, there are buses to Bang Pa-in daily every 30 minutes.

There are trains running from Hua Lamphong Railway Station in Bangkok to Bang Pa-in Railway Station daily every hour starting from 06.40-22.00 hrs. You can then take a Tuk-Tuk (50 baht) or Motorcycle Taxi (40 baht) from outside the station to the palace. Walking from the station to the palace will take you 20 minutes. You can also take the train from Ayutthaya (20 baht).

There is no public boat going to Ayutthaya. However, there are several companies that organize excursions from Bangkok to Ayutthaya and Bang Pa-In. See below.