How to get around Bangkok by bus

Bangkok Bus travel is cheap with fares from 8-32 baht. Getting around Bangkok by bus is a good way to see the city & experience Bangkok travel like a local. City buses in Bangkok are plentiful but getting around Bangkok by bus is also time-consuming and can sometimes be confusing. The City Buses in Bangkok come in different colors and are air-conditioned or non-air-conditioned. There is also a rapid bus service (BRT) but this only runs on one route.

Bangkok Bus fares are not expensive. Air-Con bus fares are between 11-32 baht depending on the distance. Non-Air conditioned bus Fares are 8 baht (red), and 10 baht (blue, white, pink, orange). You buy a ticket from the conductor on board. Don’t try to pay with large notes. Conductors can usually change a 100 baht note max. Keep your ticket as inspectors often hop on to check tickets.

If traveling by air-conditioned Bangkok bus, make sure you know the name of your destination as you will need to tell the conductor. Most conductors understand some English but they may not understand your pronunciation! Drivers usually do not usually understand any English

When catching a Bangkok bus, you will need to stick your hand out to signal to the bus driver that you want to board, and when you want to get off you should always ring the buzzer on the bus. Bangkok bus drivers are notorious for not bothering to stop to pick up passengers. Get off quickly as drivers are also notorious for speeding away from bus stops before all passengers have disembarked safely.

On crowded buses look after your belongings. Pickpockets operate on crowded buses, in particular, the red non-air buses. Don’t leave your phone or wallet sticking out of your back pocket! Keep your backpack in front of you rather than on your back

Bus stops in the Rattanakosin old city & Khaosan areas have tourist-friendly signboards in English with the bus numbers and routes. These are now being rolled out slowly around the city. Outside of tourist areas, Bus stops have a blue sign with a bus symbol and sometimes the numbers of the buses that stop there. Stand by the sign and wave your hand at the bus to signal it to stop. Some buses in Bangkok have a sign in English on the side of the bus but this is not common.

There is no night bus network, though some routes provide a 24-hour service. These are usually red buses. Most services run between the hours of 05.00 – 23.00. Bus stops have a blue sign with a bus symbol and sometimes the numbers of the buses that stop there.

Due to Bangkok’s often severe traffic congestion, traveling by Bangkok bus can be slow, particularly at peak times (07.30-10.00) and (16.30-20.00). If you want to get around Bangkok by bus it would be wise to buy an English Bangkok bus map such as the ones pictured. They cost 100 baht from bookshops such as Asia books, Kinokuniya, and SE-ED books. These maps list the routes and show bus numbers next to the roads they travel down making it easy to track your route. They are also excellent walking maps. Google maps also show bus stops on their maps. Click on the bus symbol to show the bus numbers that stop there.

Some useful Buses in Bangkok, numbers, and stops of interest on the route, a/c = air-conditioned.

The BRT shares a ticketing system with the BTS and you can use BTS travel cards. The fares are 12-20 baht depending on distance traveled. The service runs every five minutes between 06.30-09.30 and 16.00-20.00. Outside of these times, the service runs every 15 minutes. If you are visiting Wat Pariwat the temple is opposite Wat Pariwas station. 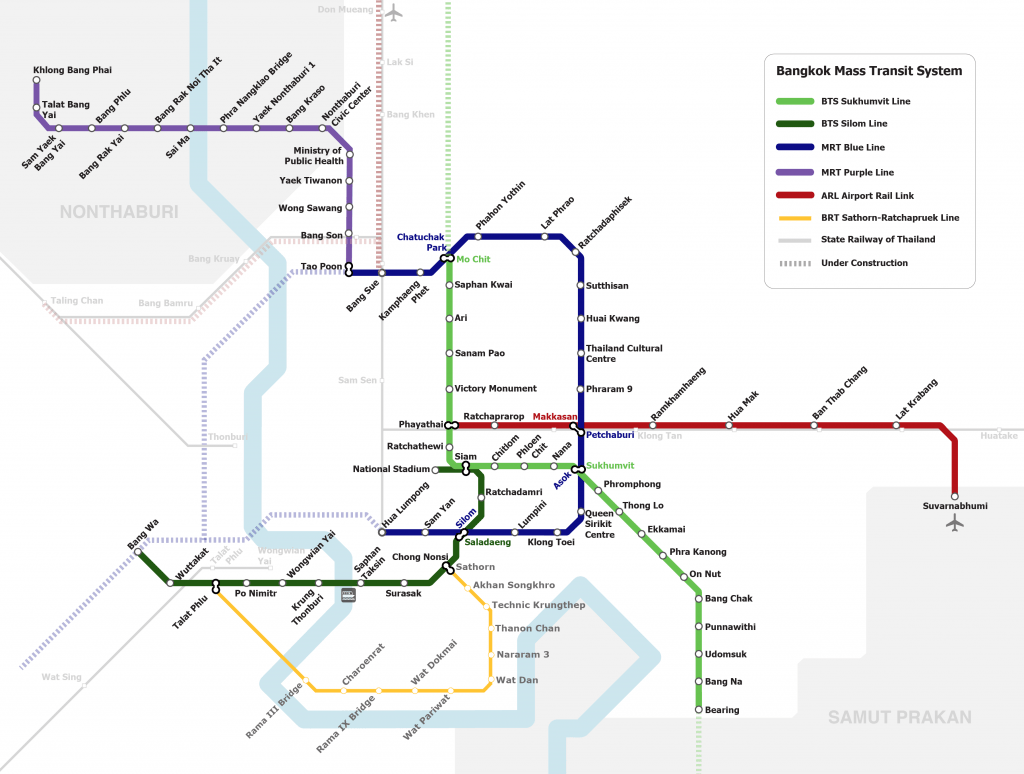