Hop On Hop Off Tourist Buses

There are three Bangkok Sightseeing Bus Tour companies running hop on hop off sightseeing bus tours in the city. The Bangkok City Bus Tour runs on circular routes taking in the major tourist attractions of Bangkok. You can stay on the bus for the entire circuit or hop on and hop off as many times as you want along the route. There are one to three-day tickets available and are of good value if you prefer to use a more tourist-friendly mode of transport to get around the city sights. The three Bangkok City Bus Tour companies are Elephant Go-Go, Giants & Siam Hop. All three companies have slightly different routes. Read on to compare routes & ticket prices.

The Siam Hop, hop on hop off Bangkok sightseeing bus tour offers the most extensive network with four routes that cover all of the most famous Bangkok attractions & many of the lesser-known ones. The buses are double-decker with the upper back of the bus being an open top.

The Siam Hop Entertainment Route takes in both nightlife & shopping. The stops include Pratunam Market, Central Plaza Rama 9, the Train Night Market & Chatuchak Weekend Market. Buses depart from King Power Mahanakhon hourly from 09.50 until 19.40 & 20.50. There is no departure at 13.50 or 17.50.

The buses depart every 30 minutes between 09.00-20.30. Guided commentary is included in the ticket price. Languages are English, Chinese, Japanese, Korean, Spanish, Thai, Russian & Bahasa. The Siam Hop ticket is activated when you first enter the bus. Unactivated tickets are valid for six months. You can change between the Siam Hop bus routes at designated route connection points & all stops are signposted. You can buy tickets for cash on the bus or in advance online. The price is the same.

The Giants Bangkok city Bus Tour is the original hop on hop off sightseeing Bangkok city bus tour. The Giants City Tour has only one route but it takes in all of the major sights of Bangkok. The buses are air-conditioned single decker with free Wifi, USB Charger, commentary, an onboard assistant, free map, headphones, and a personal audio guide in English & Chinese. The Giants city tour buses are easy to spot with their distinctive Khon windscreen design.

The tickets validity runs from the first time it is used. The entire circuit takes 2 hours & all Giants City Tour stops are signposted. The bus runs every 40-60 minutes starting at 08.45 from Siam Paragon with the last bus leaving at 16.45. Tickets can be purchased on the bus with cash or you can buy online. The price is the same.

The Elephant Go-Go Bangkok Open Top Bus Tour operates on three routes. The routes are coded Red, Blue & Green. The buses are open top with the front half of the upper deck being open. An audio guide in eight languages is provided.

The Elephant GoGo Green Line is a hop on hop off sightseeing bus night route. This bus only has one departure at 19.00 and follows the same route as the Red Line. It departs from the King Power Duty-Free Complex. 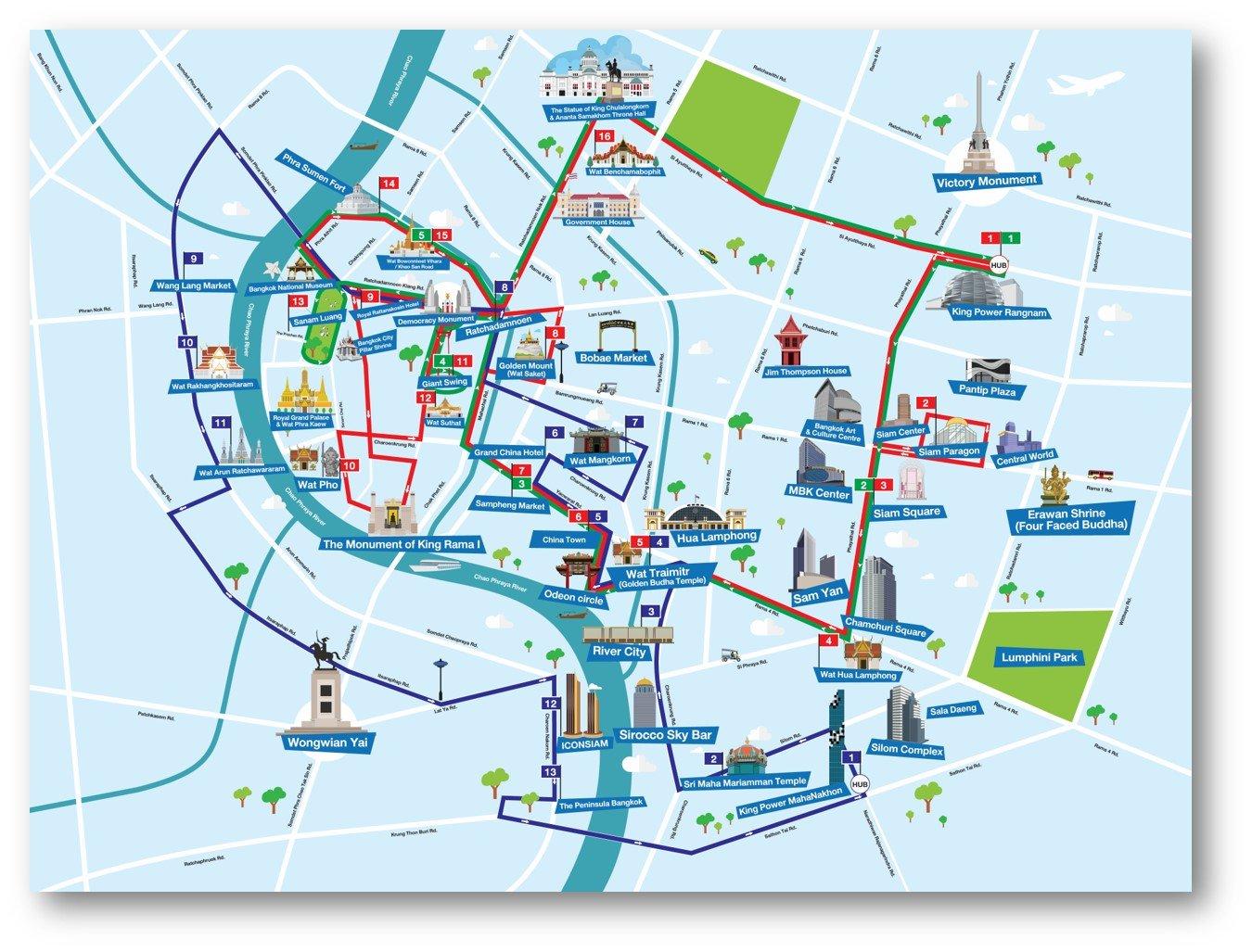 You can buy discounted tickets for 500 baht in advance. Only one route is currently in service. Click here