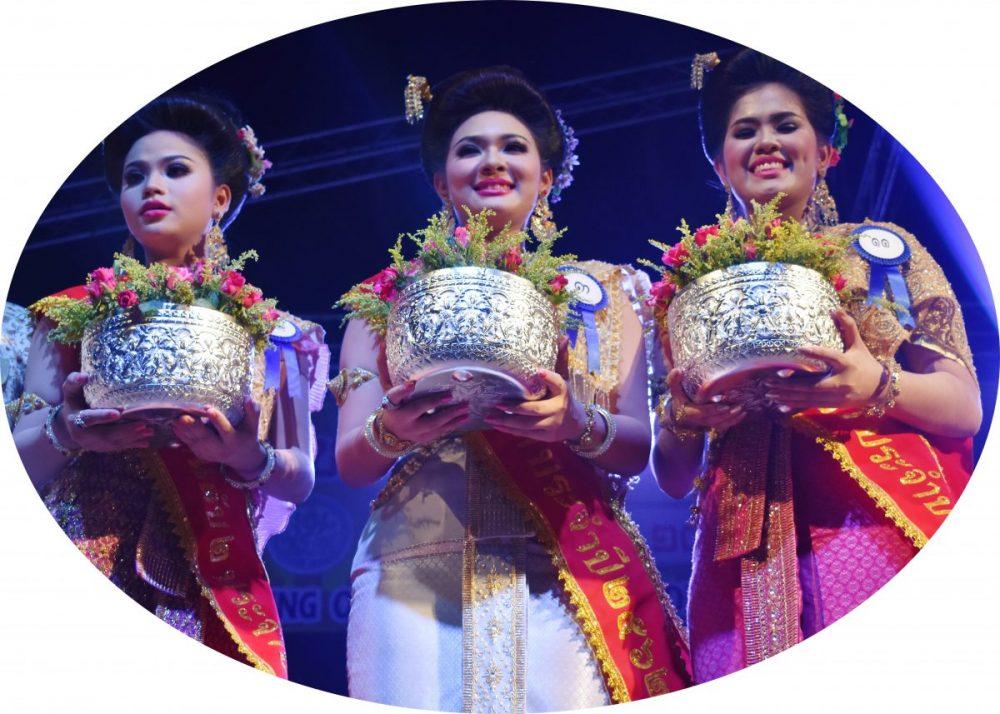 The Thai Songkran Festival is best known for its water fights but for Thai people, it’s time to return home, get together with family, visit the temple, pay respect to their elders, make merit & take part in traditional activities. To experience a traditional Thai Songkran 2019, we went to the Retro Songkran Splendours Festival at the ancient Sukhothai Historical Park. 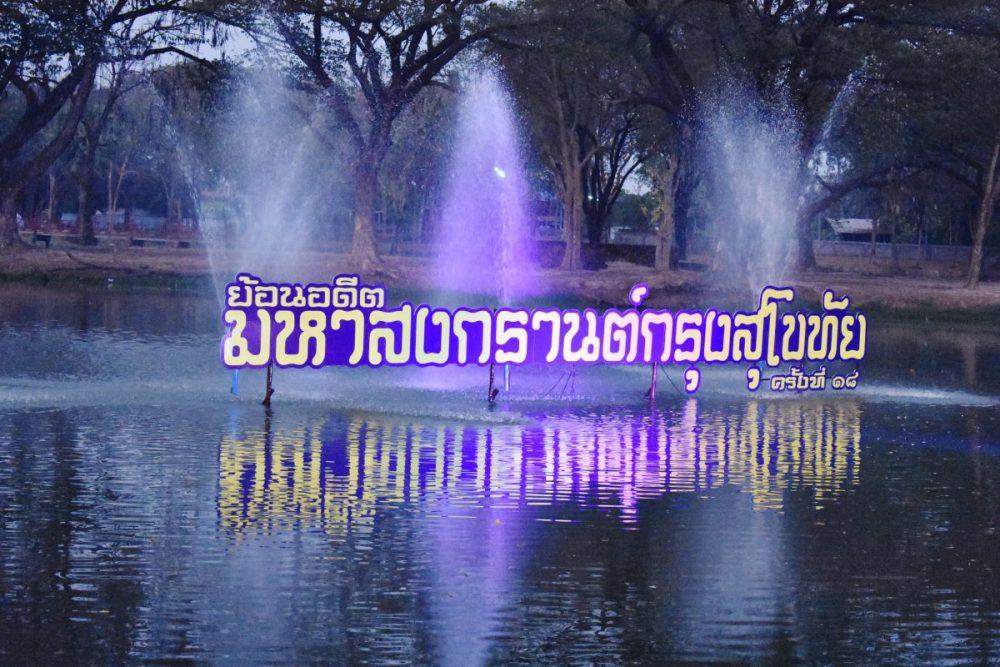 The Retro Songkran Splendours Festival site was Wat Sorasak, a small temple inside the old town walls. The temple dates back to the year 1412. There is not much left of the original temple except for a Chedi & Viharn. The Chedi base features 24 elephant statues, a common feature of Sukhothai era temples where they represented temple guardians. 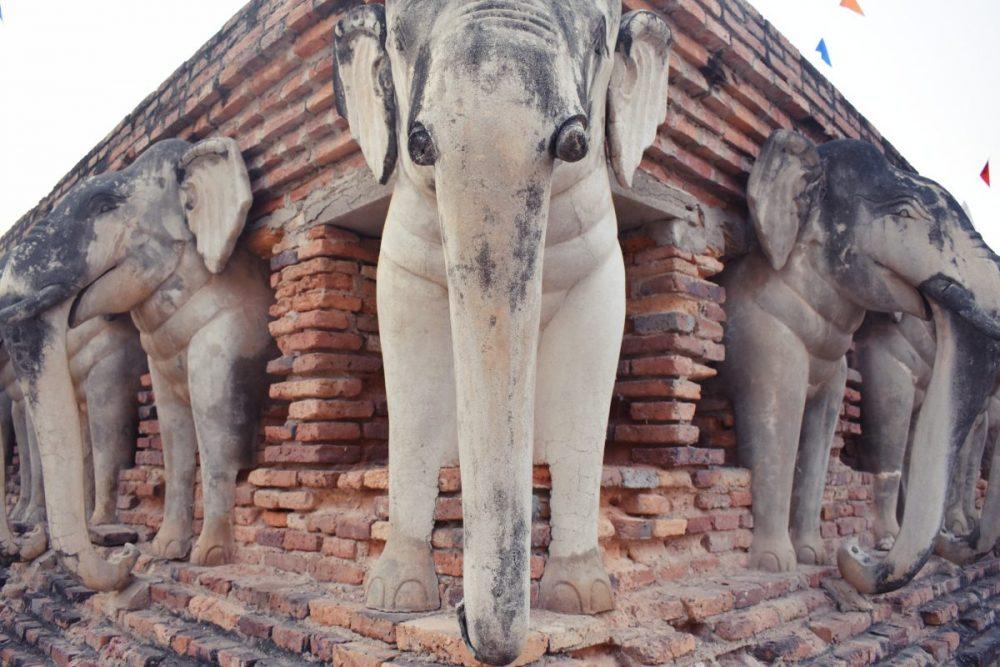 Over the three-day Retro Songkran Splendours Festival, there were many traditional old-style activities including cooking competitions, a beauty contest, folk theatre, traditional music, a parade, a sand pagoda building contest, a Muay Thai tournament & live music. There were also merit-making activities such as bathing Buddha images, paying respect to elders and giving alms to monks. All the local people participating wore traditional Thai costumes. A market area offered up some great local dishes, snacks, and desserts. 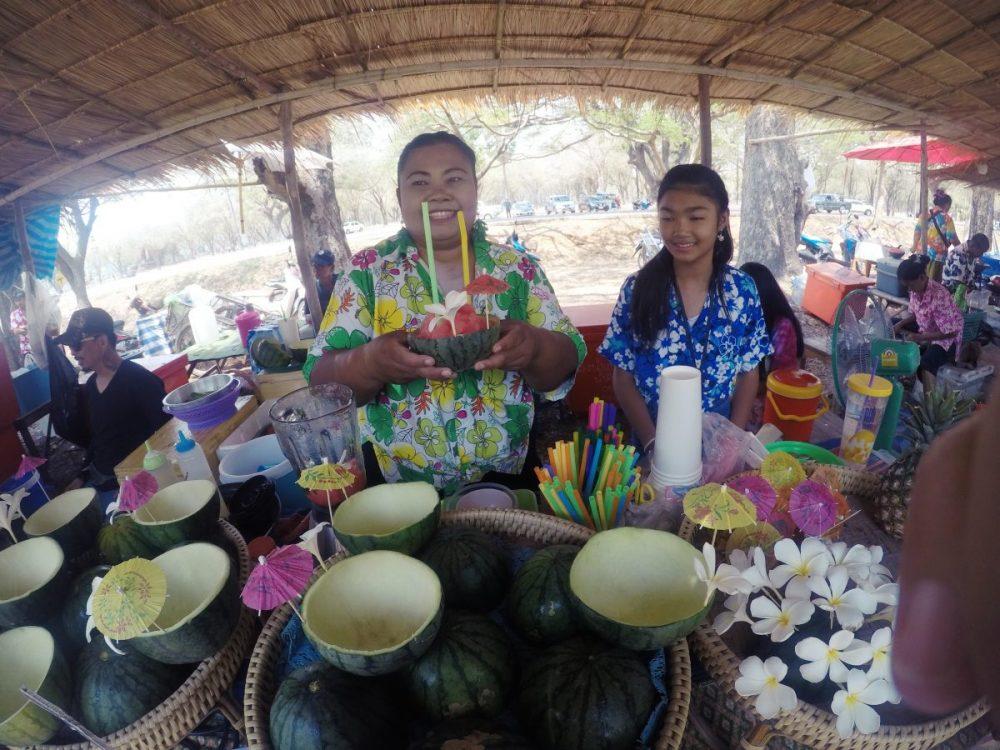 On the first day of a traditional Thai Songkran, it is essential to offer alms to monks. Thai people do this to make merit and view it as a good way to start the new year. Just outside the historical park is Wat Traphang Thong, a temple on an island in the middle of a lake. The main entrance to the temple is a wooden bridge known as the Bridge of Virtue.

At sunrise, people gather on the bridge to give alms to the temples monks. This is a daily event but is particularly popular at Songkran. The monks appear at 06.15 am walking down the line collecting the offerings. Their number included many young novice monks who looked about 7-10 years old. After collecting the alms the monks offer blessings to the merit makers before heading back to the temple. If you ever visit Sukhothai this is worth getting up early for.

One of the highlights for us was the annual Somtam (Papaya Salad) cooking competition. Teams competed to make the best Somtam while performing a dance routine known as the “Somtam Dance”. There were twelve teams and the competition was serious with great local acclaim for the winner. The whole event was great fun and featured some comical dancing and colorful costumes.

Each team made a plate of Somtam to music while their dancers performed in front of their stall. There was a team of judges who scored the team on the taste of the Somtam and the quality of the dance routine.

For the local people, one of the most important events is the Songkran Parade. Songkran Day is the 13th of April and all over Thailand, there are Songkran parades. Nang Songkran is the Thai goddess of Songkran. There are seven Nang Songkran, one for each day of the week.

The goddess of each day has a different name, dress color, ornament, likes a particular food and carries different objects in each hand. Each goddess rides in a vehicle featuring a different symbol, Garuda, Tiger, Pig, Donkey, Elephant, Buffalo & Peacock. Whichever day of the week falls on the 13th is the Nang Songkran for that year and gets to lead the parade. This year Songkran day was a Saturday so the goddess Mahotorntevee was the Nang Songkran.

The Sukhothai Historical Park parade featured twelve floats, representing local communities. Each float carried the communities Songkran Queen. The communities competed to make the most beautiful, colorful float for which a prize was given. The floats were all immaculate and accompanied by members of each community wearing themed traditional costumes. The parade passed through the town ending up at Wat Sorasak. There is no water throwing during the parade. 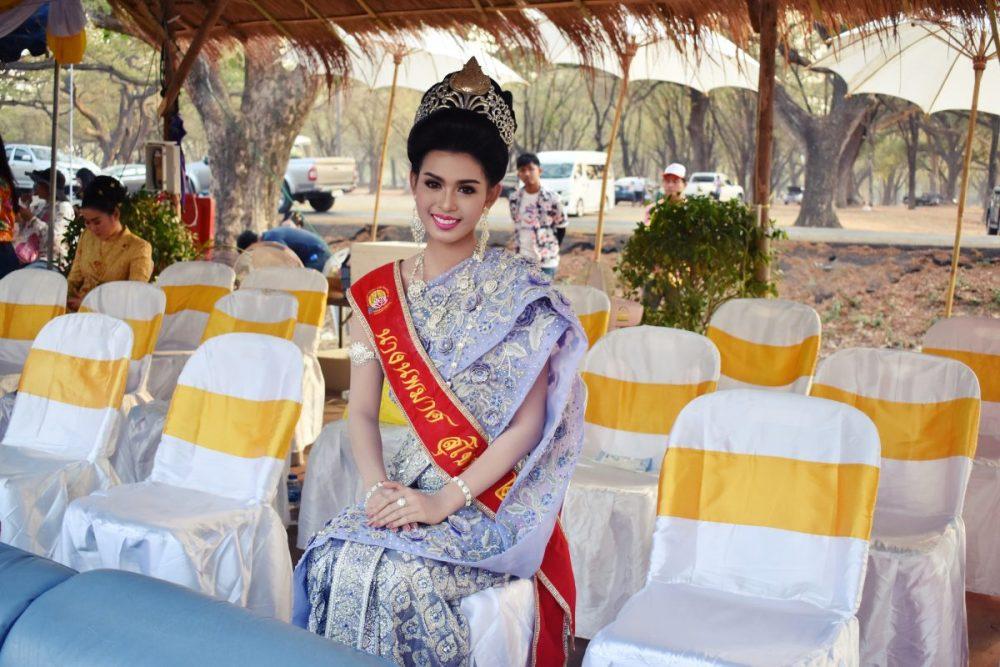 After the parade, the Miss Songkran pageant was held on the main festival stage. There were twelve contestants, who were then cut down to six, then three before the winner is announced. The contestants all wore traditional Thai dress (no western-style swimsuits). A team of TV talent show style judges presided over the contest. The judging criteria for the “Queens” were their costume, movement, beauty, and personality. They also had to make a speech on a topic they cared about and answer questions from the judges.

The Sand Pagoda Building Competition (Chedi Sai) is one of the most popular traditional activities. Bringing sand into temple areas is a way of making merit for Thai people and the pagodas are a way of paying respect to the Buddha. After the competition, the sand is left at the temple and reused for temple projects.

Pagoda building is a family activity, with the aim of making the most beautiful pagoda. Each team was given a pile of sand and there were prizes for the best pagodas. The theme of the Sukhothai Historical Park competition was the city’s most historic sites. The creations were amazingly detailed and beautifully decorated with flowers, flags, pennants, murals, candles and joss sticks.

One of the most important customs of Songkran for Thai people is to pour scented water over the hands of their parents, and older family members as a show of respect and to wish them Happy New Year. In return, the elders give blessings. This takes place on Songkran Day (April 13th).

In Sukhothai, there was a public event where local people queued to pour scented water on a Buddha image and then on to the hands of monks and elders. The monks received gifts.

Likay is a traditional Thai folk theatre featuring heavily made-up performers in colorful costumes acting out a story combining speech and song. Everything is in the Thai language so it’s difficult for a foreigner to work out what’s going on, but is still entertaining to watch. The storyline of the Sukhothai Likay performance was about a love triangle where two male characters were competing for the love of the female character.

Of course, the Songkran festival would not be complete without some good-natured water throwing. The road running around the old city filled up with pick up trucks full of people splashing water and being splashed. Loud music pumped from speakers and all the families in the old city joined in the fun outside their shophouses with large tubs of water and evening paddling pools for the kids.

If you’re looking for a break from the usual water-drenched Songkran make a date next year to explore the traditional side of Songkran. You’re be surprised just how much fun it can be!

How to get to Sukhothai

From Bangkok to Sukhothai Historical Park: You can travel by bus, train or plane. Buses leave from Morchit 2 bus terminal or from Khaosan Road. Some buses go directly to the historical park while others end in Sukhothai city. There is a Songtaew service from Sukhothai City bus station to the historical park between 05.00 – 17.30 for 30 baht. Outside of these hours, you need to negotiate a Tuk-Tuk (200 baht). The train goes to Phitsanulok where you will need to take a minivan to Sukhothai.

There are direct flights to Sukhothai by Bangkok Airways. From the airport, a shared van (Eddy Tour) to the historical park is 300 baht per person. This will also pick you up from your hotel for the return journey. There is a yellow songtaew to the city bus station for 15 baht. Other airlines fly to Phitsanulok where there are van services to Sukhothai. Click on the link above for timetables, fares and buy tickets.

We stayed at both Old City Guest House & Woodbridge Hostel. Both are a stone’s throw from the historical park, with two 7-11’s and several decent restaurants a few minutes walk away. They were clean and good value for money. Both had free bicycles for guests. Some rooms at the City Guest House have a private bathroom, TV, and fridge. Woodbridge has shared facilities and air con dorms.

Our Guide to Bangkok’s Best Temples, the Famous Ones & the Hidden Gems.

Where to find Delicious Thai Food in Bangkok.

Our Extensive Guide to Bangkok’s Nightlife.